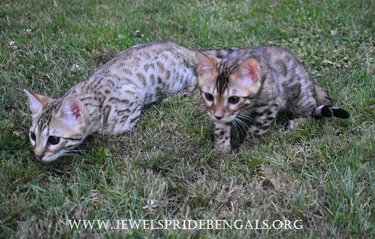 Uno and Kito, growing and playing together.
​One day, when the boys were just six weeks old, something went wrong during a play session.  We heard a very loud "BANG" come from upstairs where the kittens were playing and galloping about with mama Dia.  Upon investigation, it appeared that one of them had climbed to the very top of their cat tree and knocked a large framed picture from the wall near it (I still kick myself for being so stupid as to have placed the cat tree near something like that).

Kito was walking about with Dia, and Uno also appeared to be fine - we watched him walk into his bed and proceed to take a nap.  We removed the picture from the floor where it had landed, checked both kittens and Dia over quickly and carried on with our day.  Later on that afternoon, something seemed not right.  Kito and Dia were awake and eating lunch, but Uno was still napping.  Uno and Kito were usually very on par with one another when it came to activity level - in fact, Uno was often still awake and playing when Kito was long out of energy and recharging with a nap - so this definitely seemed odd to us.  I pulled Uno out of his bed and tried to rouse him to join his brother and eat some lunch. He stared back at me with a blank look in his eyes - his eyes seemed "dark" and "cloudy" somehow. Something was definitely not right. I felt my heart sink as I heard my inner voice telling me that the fall had been worse than I initially thought. I called the vet immediately and brought Uno in for a check up.  Our vet confirmed that it appeared Uno had somehow detached his retinas and was at least partially blind.  We were devastated. He had obviously been hit on the head by the picture when he and it came crashing to the ground. All the uncharacteristic sleeping that day was the result of concussion we surmised.  Our vet set up an appointment with the ophthalmologist to see Uno in her clinic later that week.

Uno, donning his new ID tag at 12 weeks old when he began his habit of darting for the door out of curiosity to see what was on the other side!
​The ophthalmologist confirmed our worst fears - Uno had somehow detached both retinas rendering him completely blind.  We enquired about surgery, but were quickly told that because of the severity of the detachment, surgery was not an option.  We were devastated, but we knew Uno was happy and even though blind, he was already finding his way through the house and playing well with the other cats and kittens - just days after his fall.  He was familiar with our surroundings and we felt it only appropriate to keep him with us, where he was most comfortable, rather than sending him off to another country or even just another pet home.  Although happy and well-adjusted, we felt a deep sense of responsibility to make sure no further harm could ever come to him - no doors left accidentally open for him to escape, no new homes to learn to navigate through, no new smells and people to familiarize himself with.  He deserved the familiarity of the home and family he had known since birth, so here he would stay. 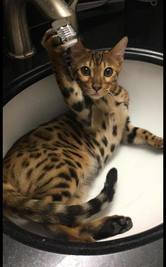 Kito, being silly in his forever home!
Meanwhile, little Kito grew up and left for his new home at 12 weeks old.  Uno ​continued to amaze and delight us with his daily developments.  Everyone who visited our home could not believe that he was blind. He had developed such a keen sense of hearing, that he could fool us all by following the toys, the other cats, and our footsteps expertly around the house.  For all intents and purposes, loss of vision hardly set this kitten apart from any of the other cats in our home.  He quickly learned how to navigate up and down the large cat trees, up onto chairs and onto the table top and back down.  Because he had been sighted for the first six weeks of his life, he had already developed a fairly keen sense of "depth perception" and was able to remember how far it was to jump from some of the lower perches of the cat tree and from the dining room chairs, etc.  We were amazed by his agility and recollection of the items in our home. 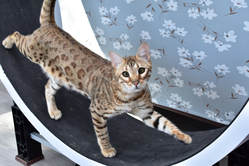 Uno, today at one year old, running on "his" Ferris cat wheel.
Uno was even beginning to try climbing onto the Ferris cat wheel with the other cats! We were amazed.  I took videos of him learning to make the wheel move, and center his body on it so that he wouldn't walk off the edge of it. It was amazing to see the talent of this brave little kitten! Now he runs on it like a pro - the wheel is Uno's and when he feels like it, he shares it with the other cats. 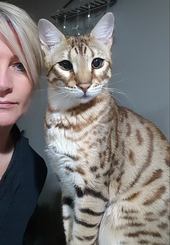 Uno posing for a selfie with me.
I know it may sound silly to say this, but Uno has enriched my life in so many ways that I couldn't have imagined.  This special boy has made me realize that our other senses - hearing, smell,  and touch - are just as, if not more, important than sight.  Uno is a watch dog - he's the first one to perk up during an afternoon siesta if he hears an unusual sound somewhere in the house or outside. The other cats don't rouse nearly as easily.  He tilts his head and twitches his ears and you can see his whiskers and whisker pads moving as he draws in the scent of the air to decide what it is that's making the sound.  I've learned to watch him and read his body language - if he seems fearful of someone or something new in the house, he tilts his head in my direction, as if looking to me to reassure him that it's ok.  When he does this, I've learned to gently make my way over to him as I speak reassuringly and I'll pick him up or walk alongside him as we investigate together.  He is always happy to meet visitors and will instantly climb on or cuddle up with those he likes and will hang back from those he's not too sure about until he's had the chance to decide what type of person they sound and smell like.  You know what they say... if my cat doesn't like you... lol.  I believe this to be true when it comes to Uno's impeccable sense of judgement.  He doesn't see feigned smiles or darting eyes - he only knows what he senses from how you touch him, how confident your steps sound as you approach him, or the voice you use when you're speaking with us.  He'll sniff you from head to foot to discern if you come from a pet friendly environment, wear too much perfume, or what you ate for lunch if some of it spilled on your t-shirt.  I would love to know what he's thinking when he does this. All I know is that when Uno decides he likes someone, I am quick to follow suit.

Uno doesn't ask for much from us, but gives so much in return.  He only asks that we feed him, love him and try our best to not carelessly leave obstructions in his path, but even when we do, he takes it all in stride.  He simply uses his senses to figure out what is in front of him and how best to get around it or through it.  Heck, it may even be something fun for him to play with - too bad for us if we didn't want it messed with!

Despite his disability, Uno is every bit a bengal.  He is curious, naughty, and confidently explores his world with the innocence and curiosity of a child.  Every day Uno entertains me, and shows me that life is so much more than the things we "don't have" or "wish we had".  Life for Uno is one big adventure - our home is his world, and as far as he is concerned it's the largest, most exciting planet in the solar system.  He's taught me that life is what we make it - and living in Uno's world is a wonderful and enriching experience.  I'm so grateful that I get to travel at least part of my path through this life with Uno at my side (or on my shoulders, as luck would have it). 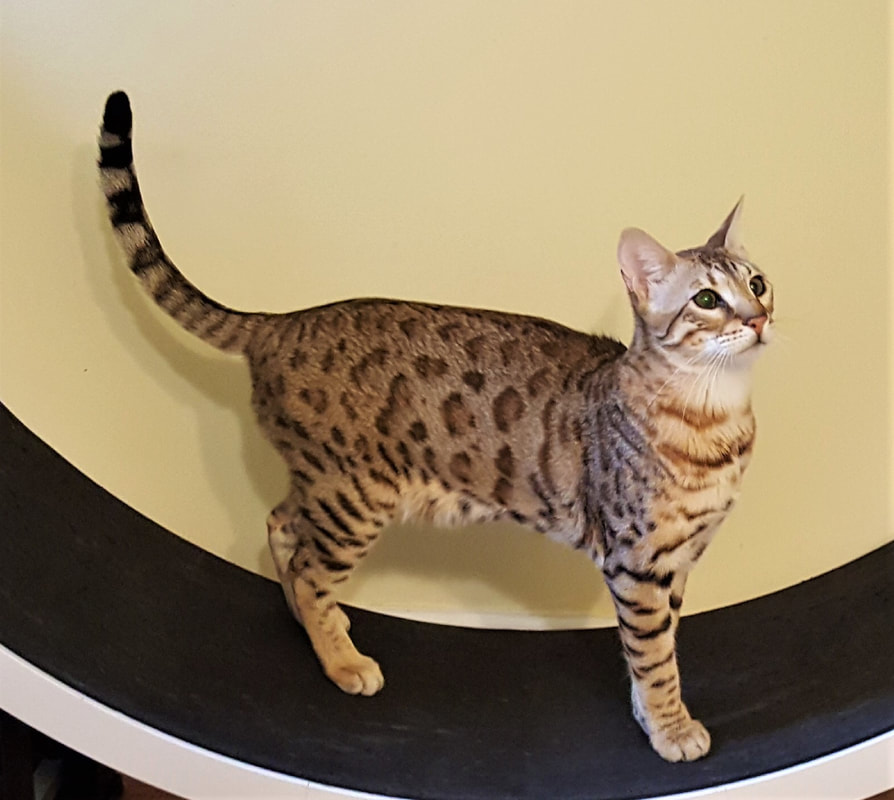 Uno on his first birthday.